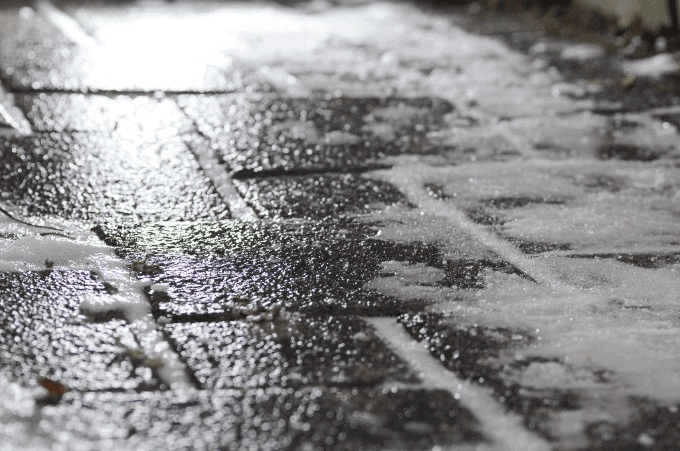 When winter officially arrives, you know it is going to snow. Freezing rain and ice particles are also in the forecast if you live in most parts of Ontario and across many parts of the United States. In Toronto ON and Chicago IL, ice can and does make walking on the sidewalks and getting out of a driveway dangerous. In both places, the local ordinances require you ensure the sidewalks in front of and adjacent to your property are cleared of not just snow but ice as well.

It is standard practice to lay down an ice melt or de-ice to get rid of any ice layering the sidewalks. While some people use such natural products as kitty litter, ashes, and sand, the majority turn to commercial merchandise. Although they all have different names, they have one main ingredient in common – salt.

Of the various ice melts available, two are always under consideration. These are rock salt and calcium chloride. Each has its advantages as well as disadvantages.

Rock salt has long been the dependable ice melt. In the winter and spring, highway road crews, homeowners and retailers have blithely scattered it across any slippery surface. This mineral was the one almost everyone used because it not only did its job; it was inexpensive, melted ice at even 25 degrees Fahrenheit and was easy to secure. Every hardware supply store and grocery store had some in stock.

It is still one of the cheapest de-icers available. However, in more recent years, other factors have placed rock salt under the microscope. Research has emerged indicating the various problems related to using rock salt. They include:

· It is damaging most surfaces particularly concrete

· If it is ingested by humans and pets, it causes gastrointestinal problems. It can be fatal

· It burns the paws of pets and other animals

Calcium chloride is another popular option. It is favored by many because of its attractive qualities. These include:

· It is effective at low temperatures – even below -40 degrees F

· Less corrosive than rock salt, therefore not as seriously impacting the surface of concrete, lawns and other flora

The major drawback of this form of de-icer is its cost. However, many ice melts overcome this by using it in combination with other ingredients. If, for example, it is combined with rock salt, it retains its overall effectiveness while reducing the overall cost. This makes the ice melt cost-effective.

When it comes to ice melts, rock salt remains popular. It is less expensive than other products, including calcium chloride. However, of all the salts currently in usage as ice melts, rock salt remains the harshest on the environment. While calcium chloride is more expensive, it causes less eco damage. Flora and fauna suffer less from it being used. Moreover, it causes less damage to concrete surfaces.

That being said, most ice melts tend to mix and match salts. When construction companies and road work departments choose a salt for highways and industrial sites, they often apply a liquid combination of calcium chloride and rock salt. It makes a solid, fast-acting ice melting solution. If you have any questions, check via your third-party service, such as Edenapp, what they use, how it affects the ice melting process, and whether it has any kind of long-term impact on your property and its inhabitants as well as nearby water supplies.