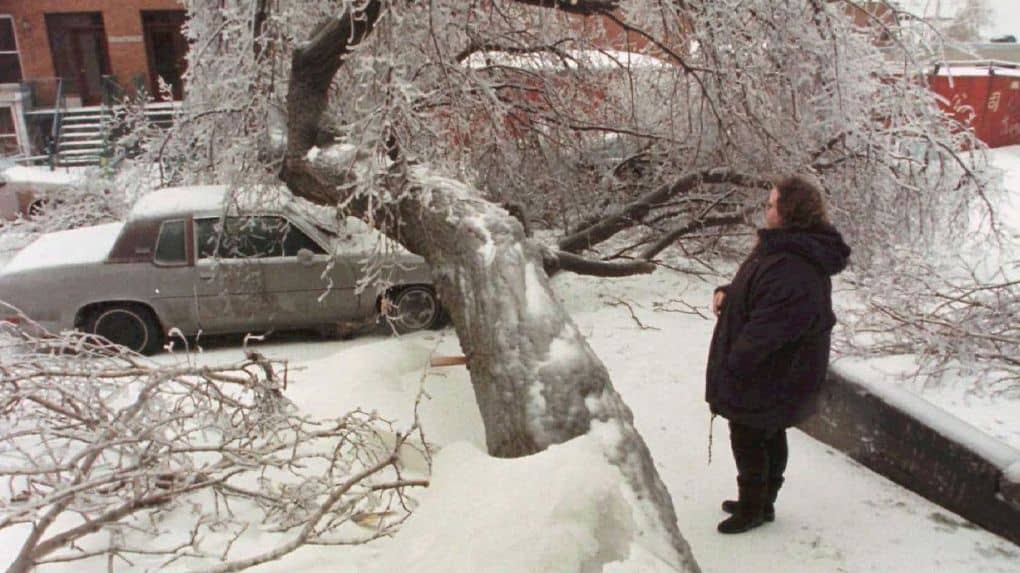 Many storms have struck the province of Ontario during the winter months. They have dumped snow heavily, causing traffic chaos, road closures, and school snow days. Generally, they hit one area of the province over the other. Usually, after a day or two, the snow event is over. Snow plows have cleared to roads, and everything is back to the normal that is winter in Ontario. However, there are always exceptions. One of these was what has been called the Great Ontario Ice Storm of 1998.

The storm began on January 4, 1998. It was a result of separate weather conditions converging – one of them a large stationary Arctic high-pressure area situated over Hudson’s Bay, another a low-pressure weather system with warm air originating in Texas, was settling in southern Ontario. Joining forces, they rolled over Ontario and Quebec without ceasing until January 10. Instead of a quick pass by snow, Ontario – and southern Quebec were struck by a furious series of three storms consisting of a deadly mixture of ice pellets and freezing rain. Instead of a traditional storm lasting a day or two, the Great Ontario Ice Storm settled in for a five-day stay with precipitation falling continuously for more than 80 hours straight.

What was also impressive, if also catastrophically unusual, was the extent of the storm. Generally, ice storms tend to be spotty in nature. Finically striking her and then many miles away. This one, however, chose to be different. When the storm was at its climax, the area of its destructive path stretched from Muskoka in central Ontario to Kitchener in eastern Ontario. It also struck a destructive path through western Quebec and the Eastern Townships, with Montreal receiving more than its fair share of attention. Not yet through, the ice storm swept on to the Fundy coasts of both Nova Scotia and New Brunswick. Nor did the United States escape its wrath.

The result was remarkable and disastrous as the affected parts of the province received twice the amount of precipitation during this time than they usually had annually. The ice and frozen rain clung to trees and hydro pole wires. The very weight of these forms of precipitation brought trees down onto the wires and snapped poles. As a result, thousands of Ontarians were kept in the dark. In fact, as many as 118,000 Eastern Ontario residents were in the dark as late as January 20 when service is finally restored to 100,000 of them.

By January 8, Ontario had declared a state of emergency. As a result, the Federal Government, as ordered by then Prime Minister Jean Chretien, sent in the military. At its peak, Ontario saw more than 16,000 Canadian Forces personnel. This was the highest number at that time since the Korean War.

The storm ended on January 10, 1998. It left behind an altered landscape. Gone were many ancient as well as young trees. Many fruit and maple trees (around 25% in Ontario) suffered severely, affecting the Maple sugar)and fruit industries in both Quebec and Ontario. Hog and dairy farmers also felt the effects of the storm. Without power, they struggled to keep their livestock alive. Farmers had to try to keep piglets from dying, and some 99% of Ontario dairy farmers whose milking equipment relied on electricity found themselves unable to milk their cows.

Ontario Hydro and its Quebec counterpart had to work ceaselessly to restore power to many areas of their provinces. The financial costs to repair power grids destroyed permanently was extremely high. Insurance companies were besieged with claims as they, too, faced expensive payouts.

However, worst still was the death toll of 28 – several to people attempting to keep warm. According to Public Safety Canada’s disaster database, the Great Ice Storm proved to be one of the very worst natural disasters in the history of Canada. With the inclusion of fatalities in Quebec, pre and post deaths totaled approximately 35.