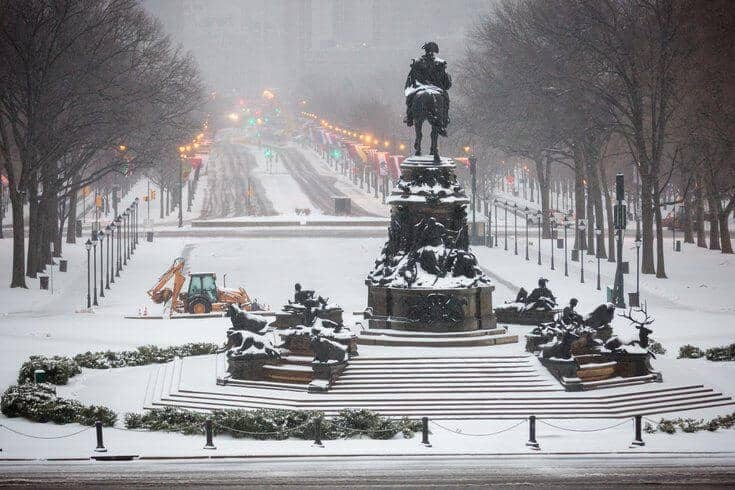 The Last Time Philadelphia Had No Snow In The Winter

Winters are cold in Philadelphia, PA. Typically, these frigid winter days last from December 1 to March 6, dropping sufficient snow to keep skiers and other snow enthusiasts happy while annoying those who simply wished the white stuff would go away. Overall, the city experiences an average of 13 inches of snow annually. This is less than the official average stated for the United States of 28 inches. These norms, however, do vary according to diverse factors, including various shifts in the overall weather patterns resulting from climate change.

As is to be expected, in accordance with the city’s historical pattern, some years more snow finds its way to the streets of Philadelphia. This was the case during the Blizzard of 1996 when 27.7 inches fell. It has not been duplicated since.

The polar opposite is also true. Some years, fewer snowfalls. So far, 2019/2020 has been one such year. While snowfall has been above average for a number of locations in this region, this has not been true for Philadelphia. In fact, the ground has been virtually snow-free for this winter (receiving around 0.3 of an inch of snow as of Jan. 19), resulting in lower costs for snow plow services and salting of the roads by snow plows. It also means fewer residents hurting their backs while working hard to clear the snow away from sidewalks, driveways, and walkways. To date, there has been a decreased need for heavy-duty, ongoing snow removal. However, in spite of the lack of snow so far this year, this is not the ultimate record.

The winter of 1972 to 1973 saw little to no recording of snow depth. There was none to record. The minimal amounts that managed to remain on the ground were officially immeasurable. This held true not only for December 1972 but all the way through into March 1973. Even October and November were snow-free. What was even more surprising was the lack of any significant snowfall in January. This is the month where traditionally Philadelphia receives the most amount of snow annually.

While the amount of snow the city receives annually varies, it is safe to say that the winter of 1972-1973 was one for the record books. It was one where the snow removal industry had to look for their income elsewhere. It was one where the noise of snow plows and snowblowers was lacking. There was no need for residents to worry about meeting the requirements of local snow removal ordinance 10-720. As a result of the paucity of snow and ice, there was also no need to use a third-party service such as Edenapp to find someone to clearing sidewalks and, therefore, remove any threat of receiving a $50-300 fine.