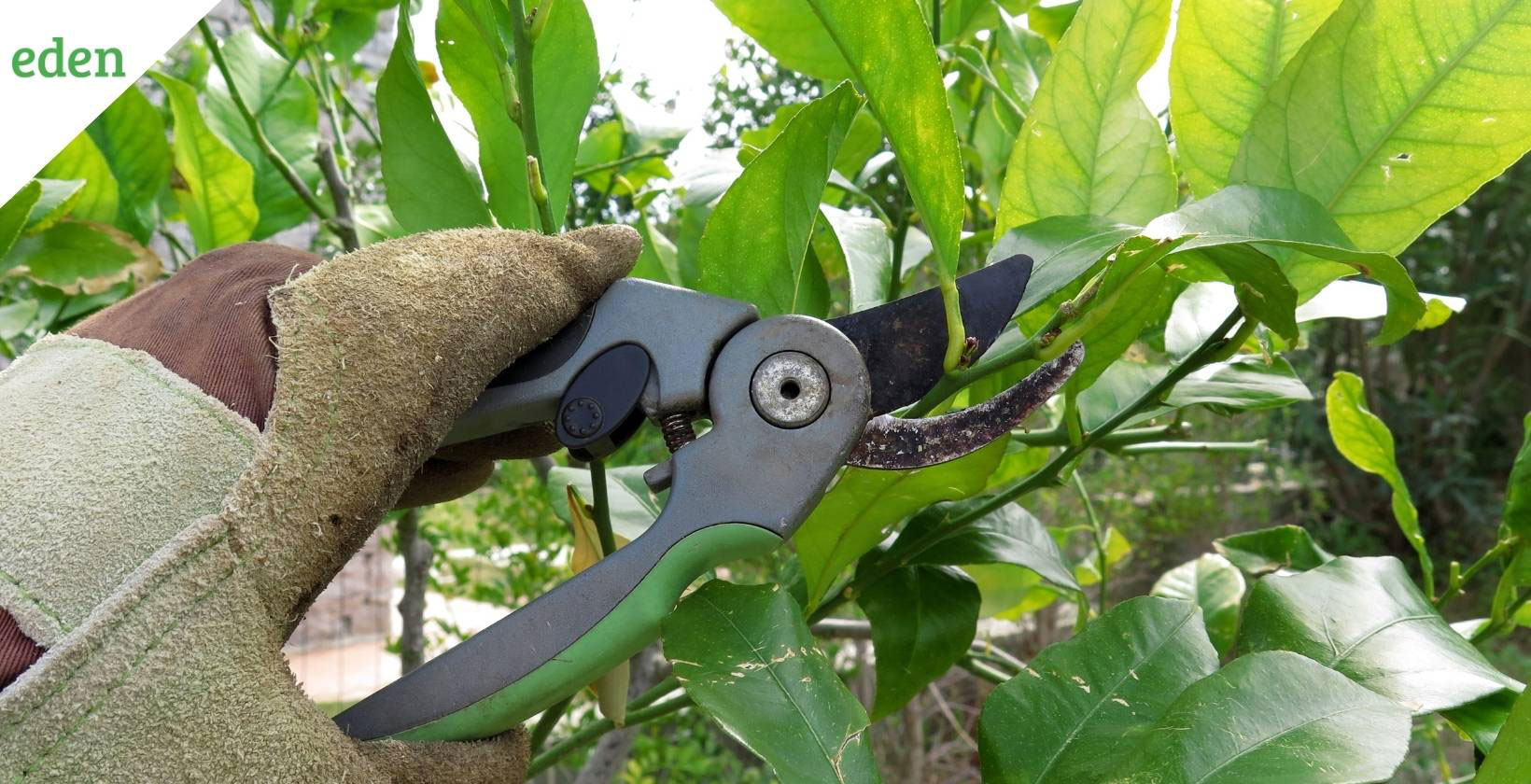 What is the best time to prune different Trees?

The best time to prune different trees is usually in the winter as the trees go dormant, according to landscaping and gardening experts, Eden. On the other hand, many believe that you should prune or trim trees once the bright leaves begin to fall.

When should you prune trees?

The time from November through March is the dormant period for many plants and trees. These cold months are the best time to prune most trees. The reasons being:

If you are planning on pruning trees, here are the best times to prune different trees: 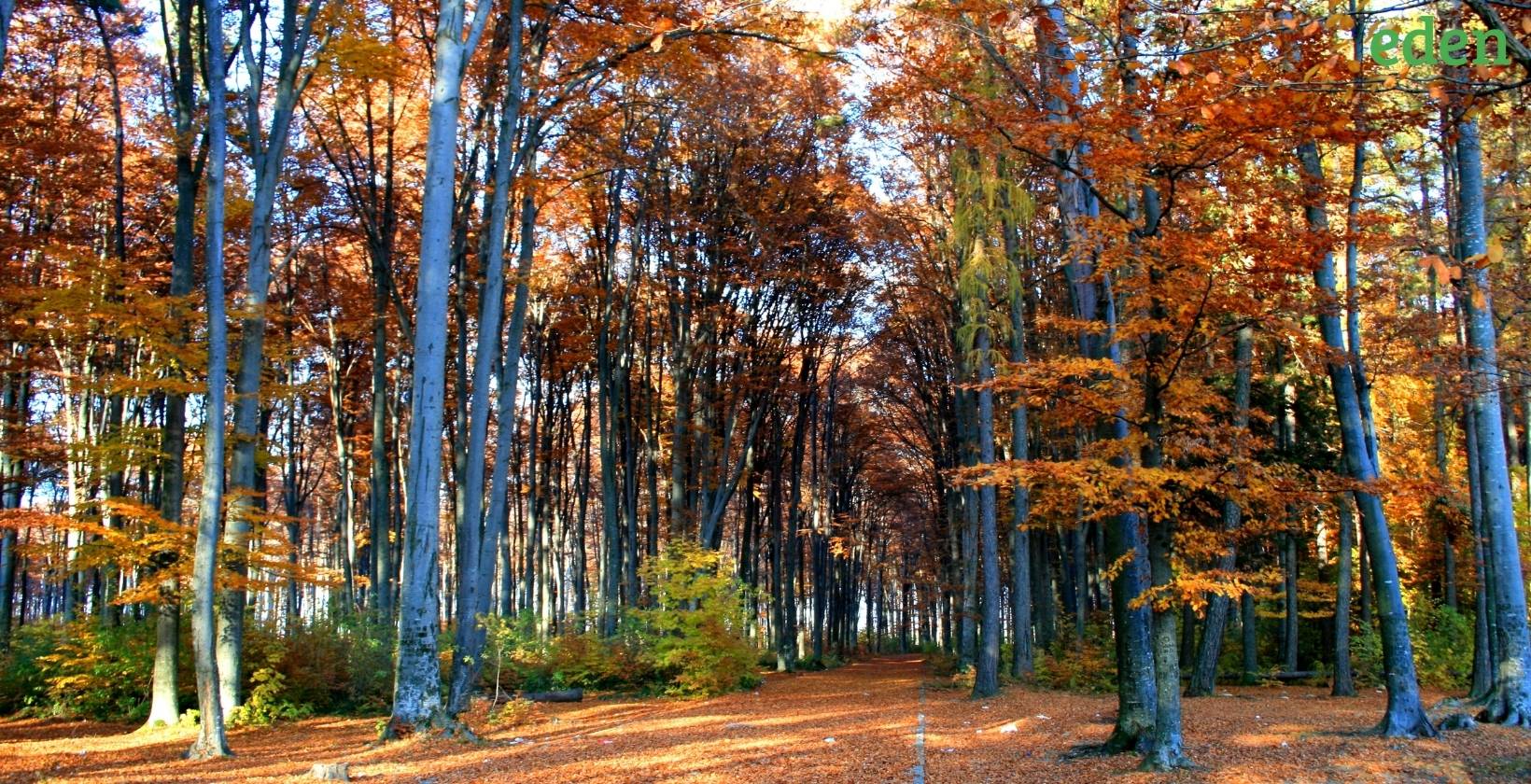 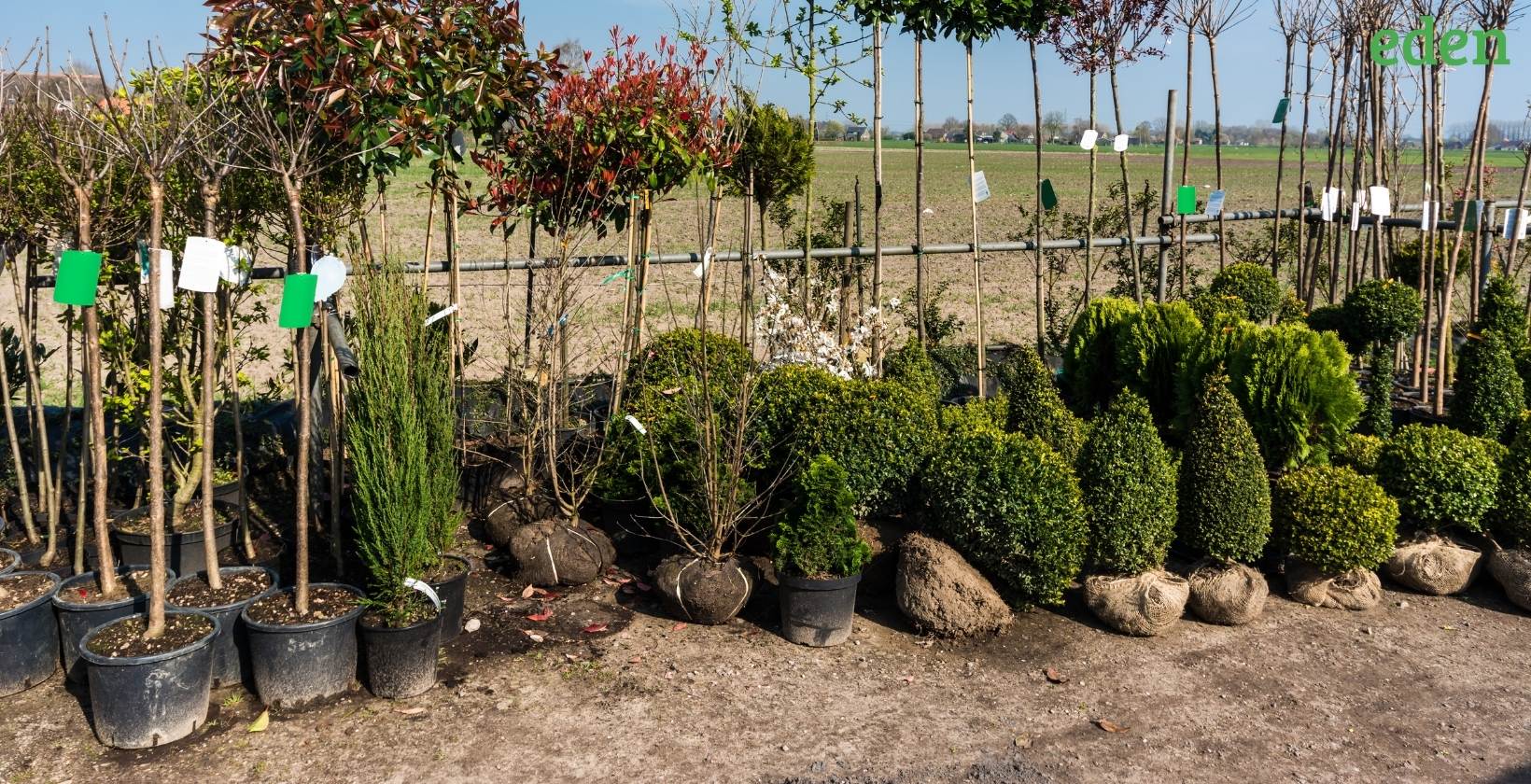 Young tree usually do not need to be pruned right after being transplanted. Experts recommend waiting for at least a year before pruning the growing tree. You can prune young trees by removing broken and damaged branches in the first year. Make sure to let the temporary low branches remain. These branches should be short enough to be unable to completely cover the permanent branches. These branches should be low enough to protect the young trunk too. You can gradually prune these branches off as the tree grows.

From this point onwards, you can start pruning the tree like normal and shape it as it keeps growing. Proper pruning helps to develop a strong, well-shaped tree. It is recommended to consult with expert gardeners before pruning young trees for a professional opinion on the best time to prune the young tree, as the right time may vary according to the type of tree and the area of the country you live in. 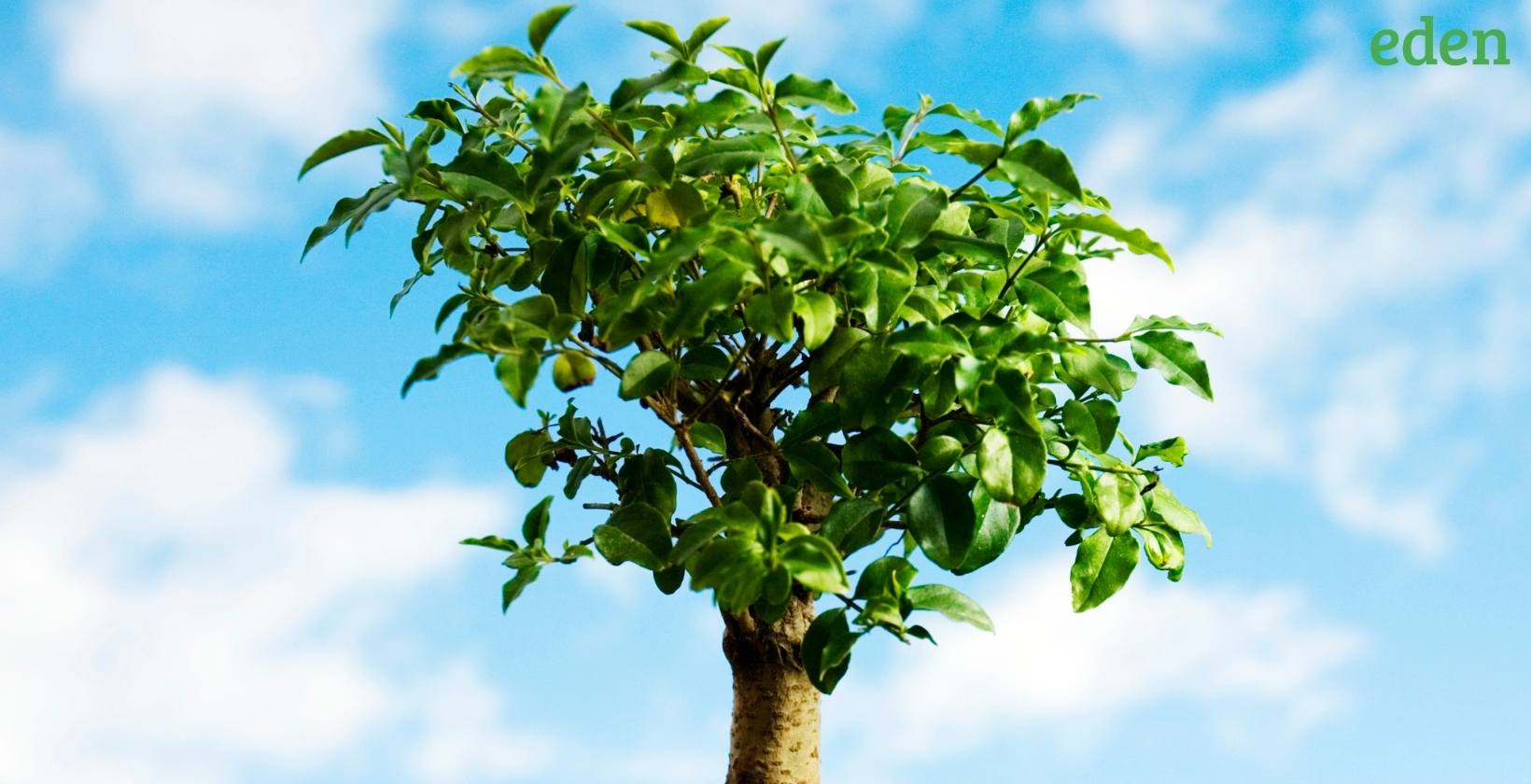 Newly planted trees should be treated with care in their initial stages. Though you may feel tempted to start pruning a newly planted tree it is recommended to wait for at least a year. If you happen to prune the tree before its root systems have had a chance to develop and become strong it may reduce the tree’s ability to acquire nutrition. Apart from this, early pruning of new trees can also affect their overall growth.

Make sure to inspect the tree before making any cuts. Usually, newly planted trees only need corrective pruning, which involves:

Similar to young tree, the new trees should have the lower branches intact to protect the tree and provide it with nutrition. You should also test the soil before deciding to fertilize the tree. The level of soil nutrition and pH can indicate if the tree needs added nutrition in the form of fertilizers. A few years later, you can begin to remove the lower branches over a period of 10 years once the tree becomes stronger. 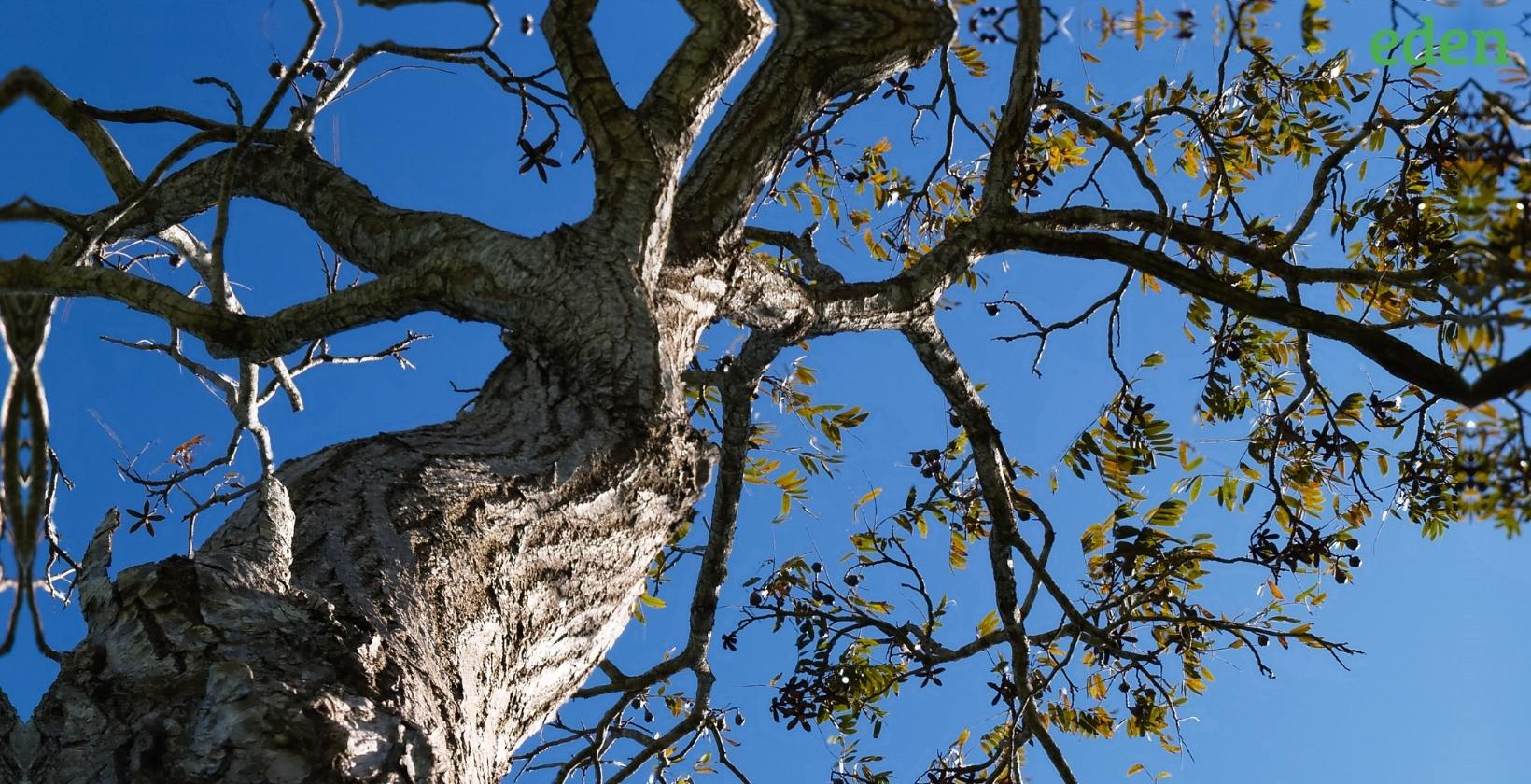 Subtropical trees can be pruned year-round, especially in coastal areas such as California and Florida because of the growing environment. These trees are able to replace lost tissue continuously and get plenty of sunshine and water all year round.

According to experts, you should prune less than 30% of the live tissue from trees in any season. So, if you see a large branch with more than 30% of its leaves, you should leave the branch alone. 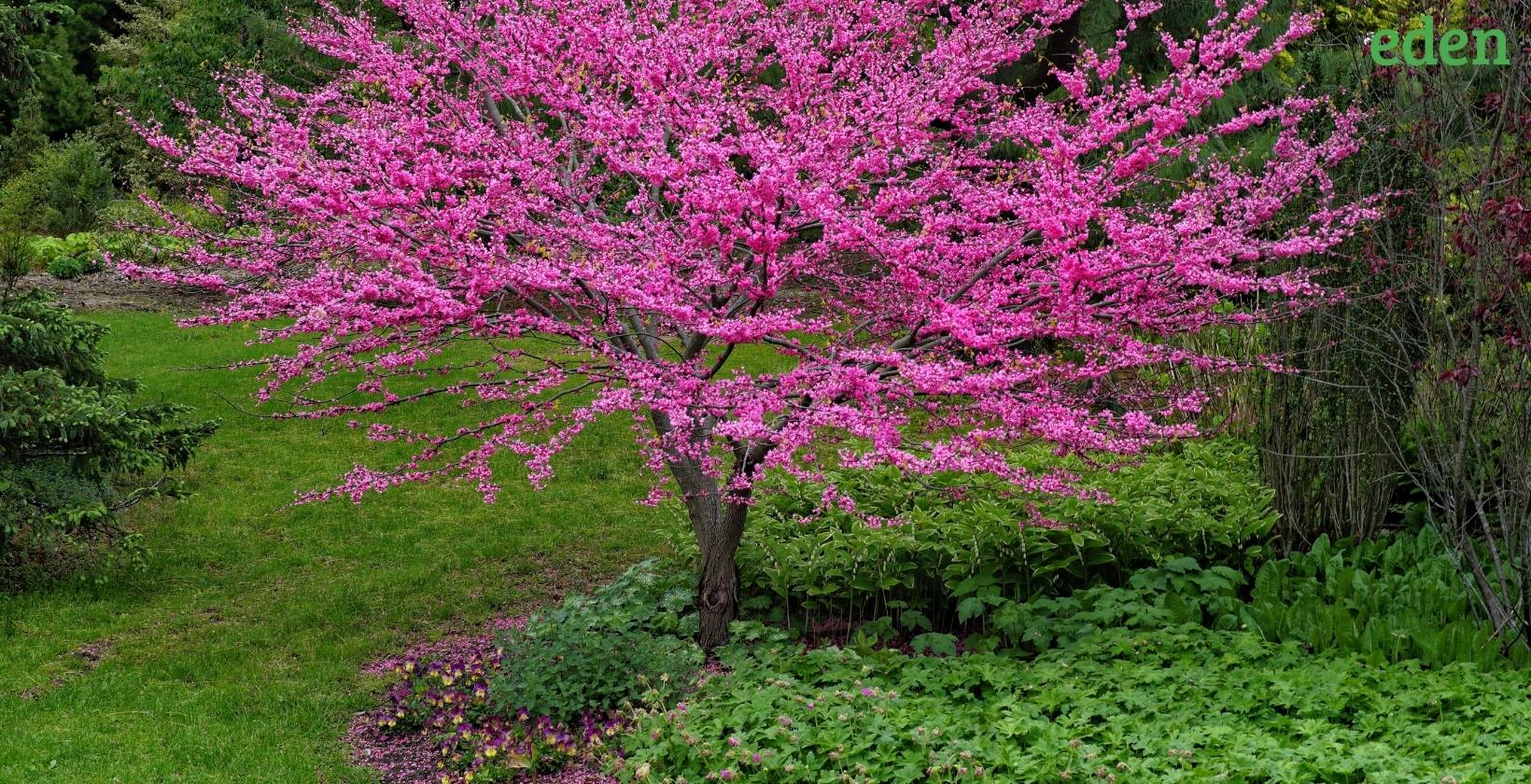 The best time to prune flowering trees depends on the time of the year that the tree blooms. In general, you should prune spring-blossom trees immediately after they flower. For trees that bloom in summer or fall you should prune them in late winter or early spring, right before their dormant period ends.

Regular pruning of dead and decaying branches can be done any time of the year. However, some types of trees have specific requirements and rules for pruning or trimming.

On the other hand, during the late winter to early spring period, you can prune late-blooming trees, such as those that bloom in the summer or fall. For instance, American holly, smoke tree, etc. should be pruned between late winter and early spring. 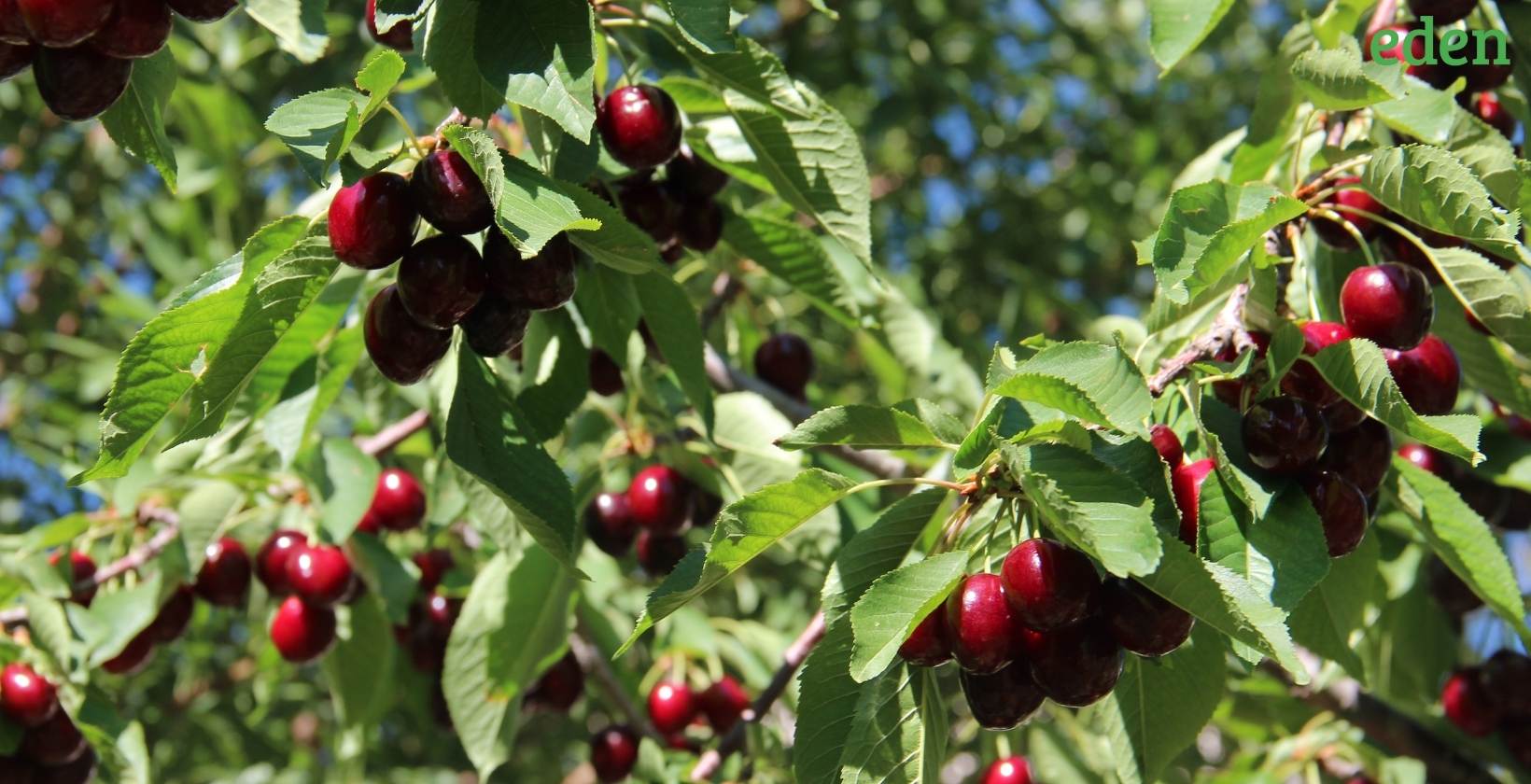 Fruit trees should also be prune during the late winter to early spring period. You can also prune fruit trees in late July to August. However, significant pruning during this period can be harmful to the tree because it gets weak with late fall pruning. This is one of the reasons it is recommended to prune trees near the beginning of spring.

By pruning fruit trees, you open up the canopy as opposed to an overwhelmed and cluttered canopy that blocks sunlight from reaching the rest of the tree. A pruned fruit tree gets sufficient sunlight and hence produced healthier and bigger fruits.

When should you not Prune Trees?

According to expert arborists, such as Eden, you should avoid pruning trees in the period between late summer and early fall. The reason is that during this time, trees tend to prepare for the dormancy period. Besides this, pruning also encouraged new growth which can prevent the tree from entering its natural dormancy. As the cold season approaches, the tree may find it difficult to heal in time, leading to the tree getting diseased or decayed.

However, there is an exception to this as deciduous trees should be only pruned during late fall or early winter. This is the beginning of the tree’s natural dormancy and helps to prevent bleeding sap in the spring.

As you can see, there are different times when different trees can be pruned, though most of them can be pruned between late winter and early spring. Most homeowners are unaware of the kind of trees on their property, until a crisis strikes. You should learn about the different trees around your home so you can complete their needs to stay healthy and add beauty to the landscape. Before pruning trees, it is highly advised to consult with expert arborists, such as Eden to learn the best way to prune different trees in your yard.

To help you make the best buying decision, we have listed the best battery-powered lawn mowers of 2022. 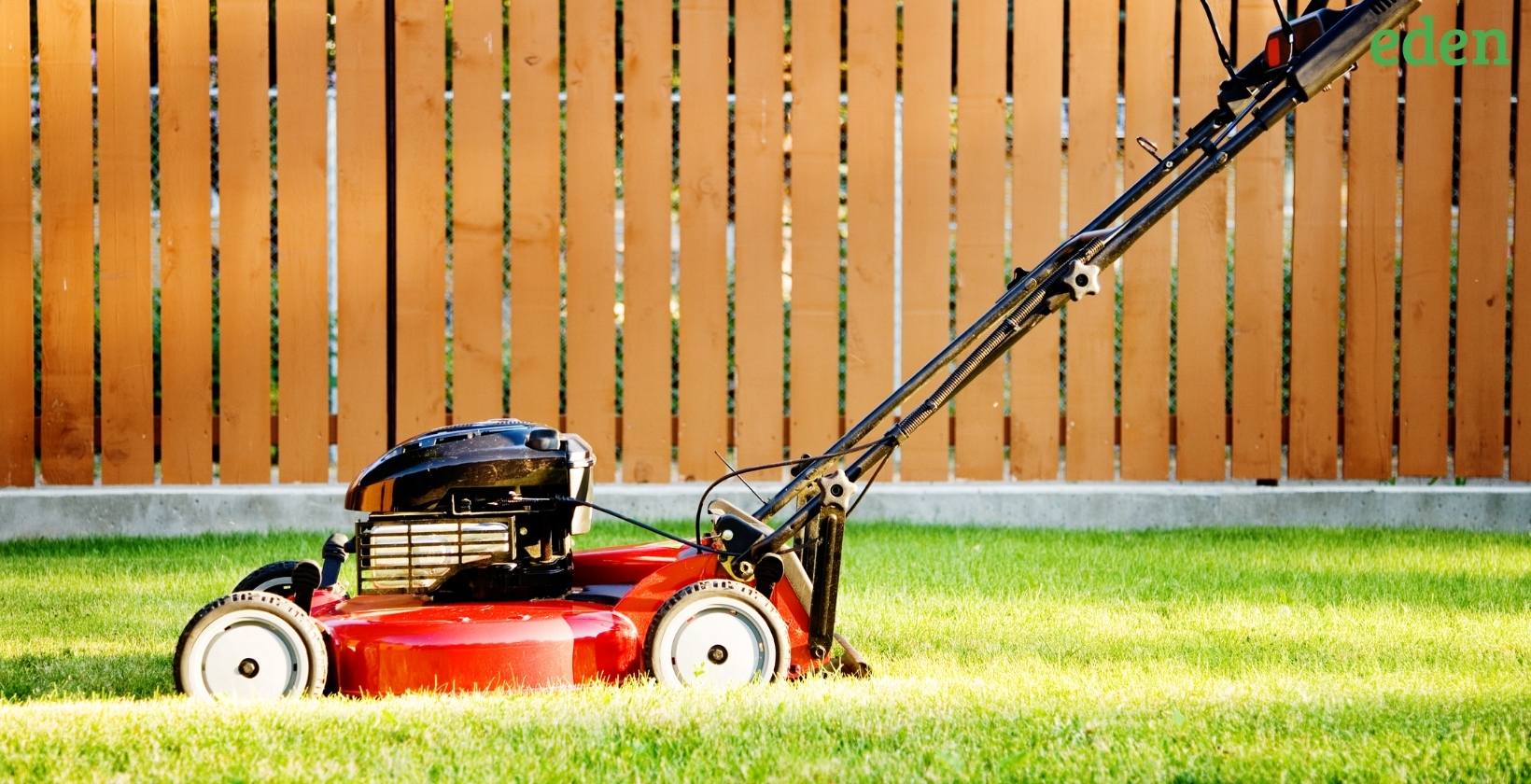 The Snapper XD 82V MAX cordless electric push lawn mower scores high in several categories. It comes equipped with a high-voltage battery that gives a maximum run time of over 60 minutes. It has a wider cutting deck that helps to mow grass faster. This battery-powered lawn mower also has a relatively affordable price tag for its class.

The versatility of this lawn mower allows several options for disposing of the grass clippings. You can choose to use the discharge chute while you mow, or use the attached mulcher or even gather the grass clippings in a 1.7-bushel collecting bag. The lawn mower can be set to cut grass at 7 different heights to get a uniform lawn.

The lawn mower has a durable steel deck and reliable engine from Briggs & Stratton, making it one of the most durable and reliable battery-powered lawn mower in its class. 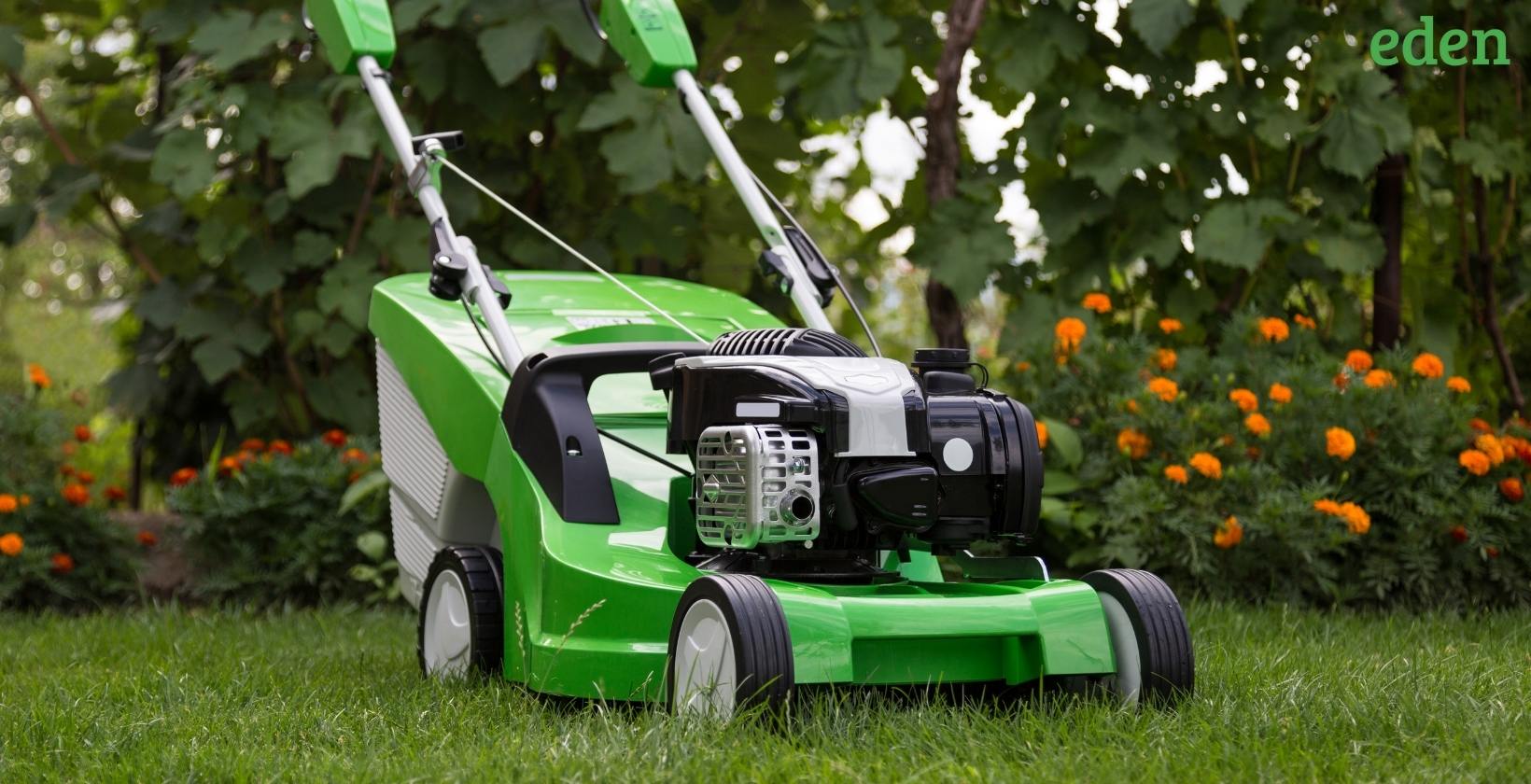 Besides this, this 40 volts 14-inch lawn mower is also incredibly affordable. It has several features that are similar to the Snapper lawn mower listed above. This lawn mower lets you adjust the height to 5 different positions, ranging from ¼ inch to 3 3/8 inches. You can also choose to mulch the grass clippings or collect them in the rear bag. 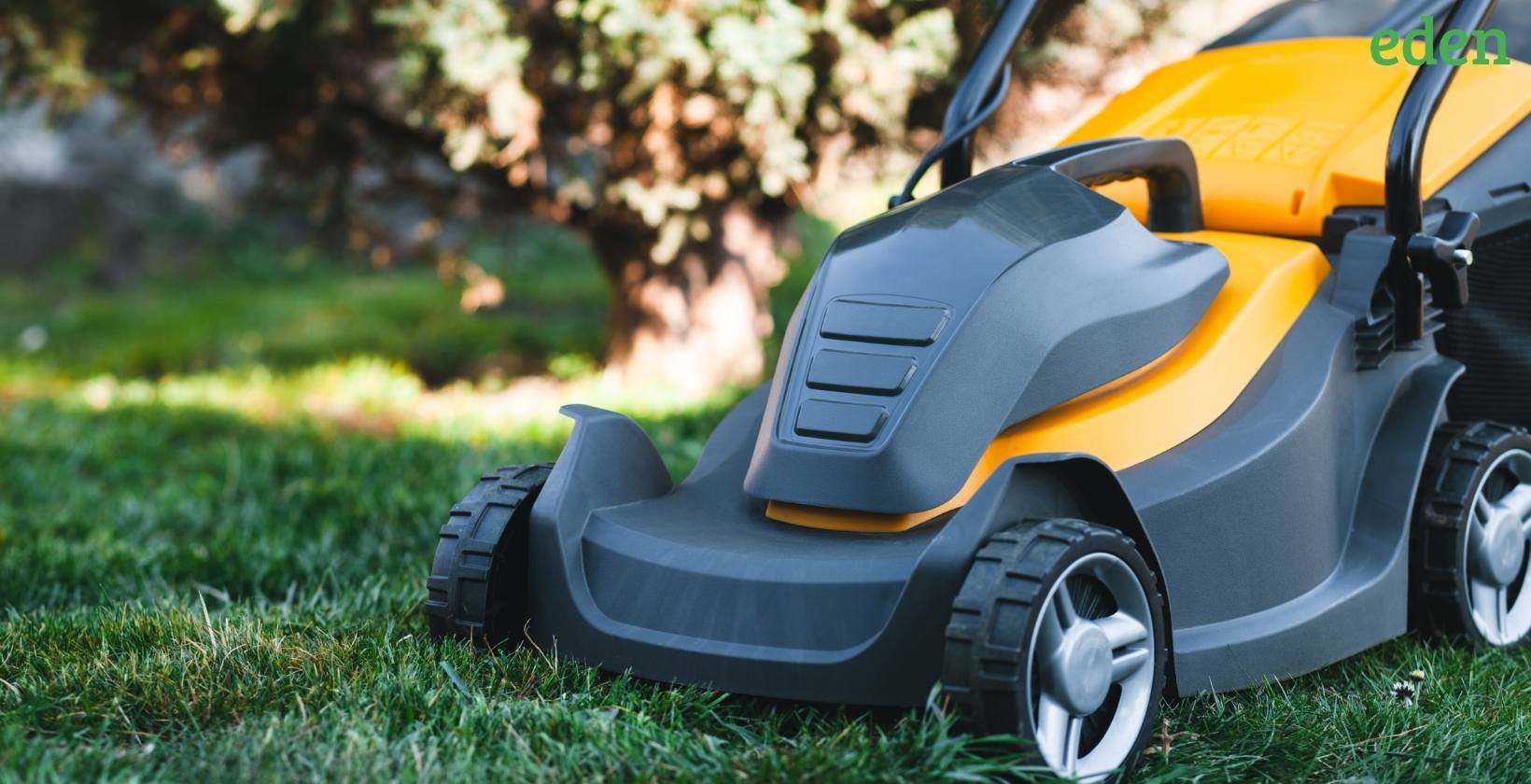 The WORX WG779 40V Power Share mulching lawn mower comes with dual 20-volt batteries that are also compatible with other WORX Power Share tools. It also has a dual-port charger that can charge the two batteries simultaneously. This battery-powered lawn mower is equipped with a mulching plug and a plastic-covered rear collection bag. The bag has an indicator to let you know when the bag gets full and needs to be emptied.

The lawn mower handle has a battery indicator that shows the level of battery charge. Apart from this, the lawn mower is also equipped with an intellicut torque-on-demand knob that regulates the power for tougher or easier grass conditions. This innovative technology helps to save significant amount of battery life while still providing ample power to cut thick grass.

This is a lightweight battery-powered lawn mower and its compact size also makes it easier to store when not in use. 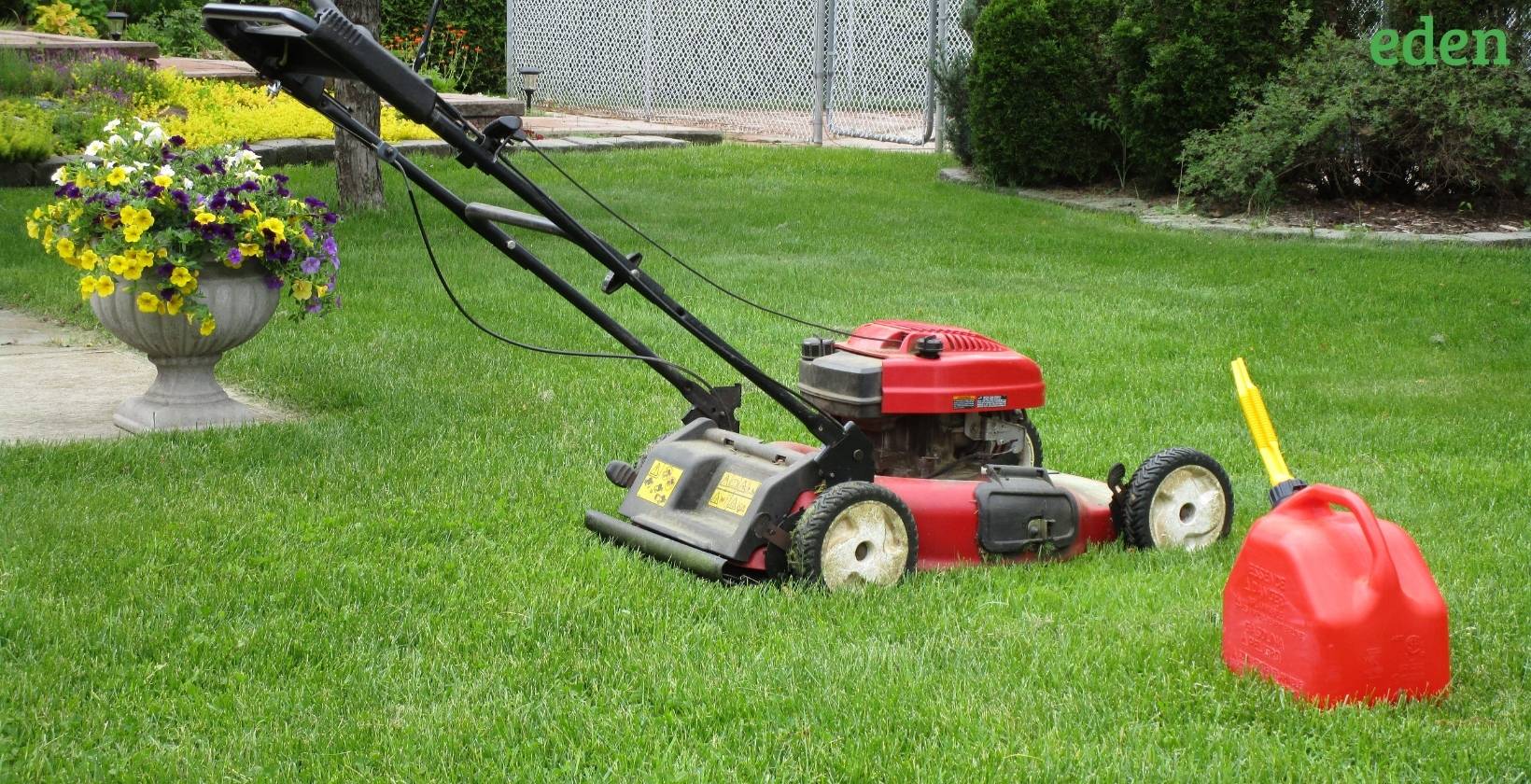 The BLACK+DECKER 40V MAX cordless electric lawn mower comes with an additional lithium-ion battery. This allows you to charge one battery while you use the other and need to mow large-sized lawns. You can double the run time of the lawn mower by switching the two batteries one by one. This lawn mower is also equipped with 6 different height positions, 1 to 3 inches, so you can easily mow grass in dips and hills in your yard. A single-lever system lets you adjust the cutting height on the go.

This lawn mower is equipped with a large 9.5-gallong collecting bag to collect the grass clippings. Or, you can choose to use the mulching feature to turn the grass clippings into mulch. The mower, along with the collection bag, is compact in size and thus easy to store when not in use. Besides this, the cutting deck is around 16 inches wide which is a good balance between compact storage and cutting large swathes at a time. 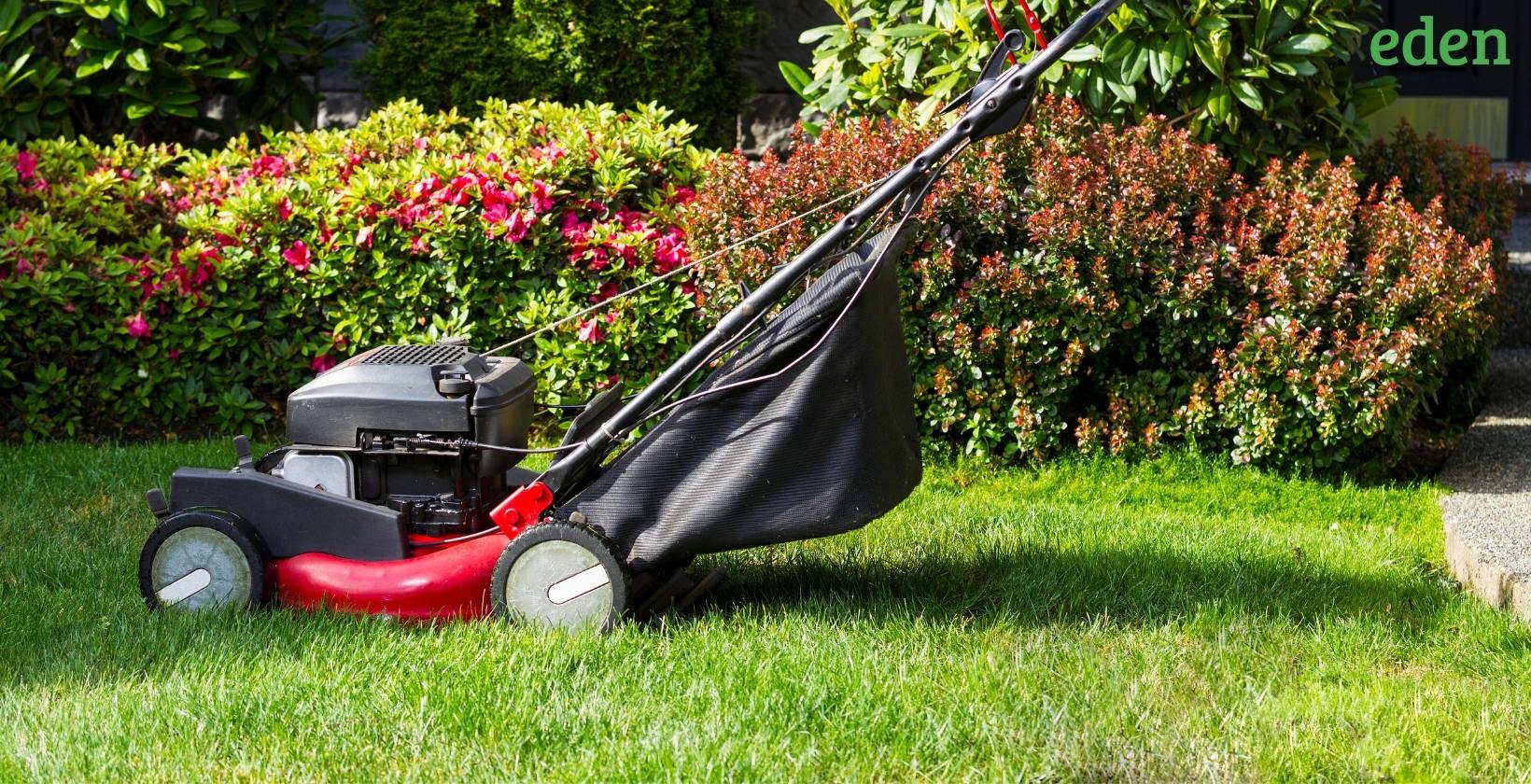 The Yard Force 120V self-propelled cordless electric lawn mower is a high-end mower that moves on its own power so you don’t need to push it physically, but only guide it around the yard. This mower allows you to adjust its speed with a simple lever for varying terrain.

The lawn mower is equipped with advanced technologies, such as the built-in torque-sense sensors that automatically adjust mowing power output as required. This means that the mower blades spin faster when the sensor detects thick grass and slows down on thinner spots to save battery run time.

This mower can run on two different batteries and produce an astonishing 120 volts of power with up to 100 minutes of run time on a single charge. The lawn mower has the largest cutting width than any other on this list, which makes it ideal for use in large yards.