Welcome to your Eden page for Cincinnati, OH. Get a free quote and order from top rated contractors in Cincinnati. Lawn maintenance, snow removal and landscaping companies are available for hire from the ease of your computer and smartphone.

Cincinnati is a major city in the U.S. state of Ohio, and is the government seat of Hamilton County. Settled in 1788, the city is located at the northern side of the confluence of the Licking and Ohio rivers, the latter of which marks the state line with Kentucky. The city is the economic and cultural hub of the Cincinnati metropolitan area, the fastest growing economic power in the Midwestern United States based on increase of economic output, which had a population of 2,190,209 as of the 2018 census estimates. This makes it Ohio's largest metropolitan area and the nation's 29th-largest. With a city population estimated at 302,605, Cincinnati is the third-largest city in Ohio and 65th in the United States. Cincinnati is also within a day's drive of 49.70% of the United States populace, the most of any city in the United States

The city is undergoing significant changes due to new development and private investment. This includes buildings of the long-stalled Banks project that includes apartments, retail, restaurants, and offices, which will stretch from Great American Ball Park to Paul Brown Stadium. Phase 1A is already complete and 100 percent occupied as of early 2013. Smale Riverfront Park is being developed along with The Banks, and is Cincinnati's newest park. Nearly $3.5 billion have been invested in the urban core of Cincinnati (including Northern Kentucky). Much of this development has been undertaken by 3CDC. The Cincinnati Bell Connector began in September 2016.

Cincinnati is in the bluegrass region of Ohio. Cincinnati is midway by river between the cities of Pittsburgh, Pennsylvania and Cairo, Illinois. The downtown lies near the mouth of the Licking, a confluence where the first settlement occurred. Greater Cincinnati spans southern Ohio and Indiana, and northern Kentucky; the census bureau has measured the city proper at 79.54 square miles (206.01 km2), of which 77.94 square miles (201.86 km2) are land and 1.60 square miles (4.14 km2) are water. The city spreads over a number of hills, bluffs, and low ridges overlooking the Ohio in the Bluegrass region of the country. The tristate is geographically located within the Midwest and is on the far northern of the Upland South.

Three municipalities are enveloped by the city: Norwood, Elmwood Place, and Saint Bernard. Norwood is a business and industrial city, while Elmwood Place and Saint Bernard are small, primarily residential, villages. Cincinnati does not have an exclave, but the city government does own several properties outside the corporation limits: French Park in Amberley Village, the disused runway at the former Blue Ash Airport in Blue Ash, and the 337-mile-long (542 km) Cincinnati Southern Railway, which runs between Cincinnati and Chattanooga, Tennessee. 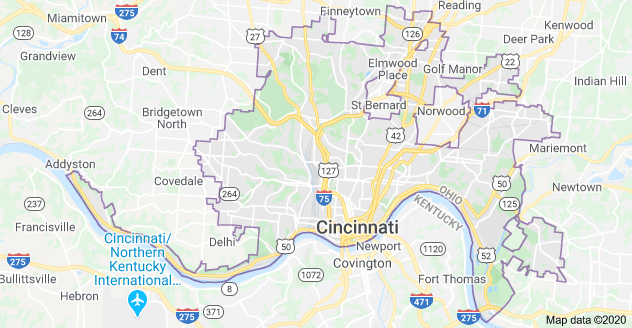 Neighborhoods We Service in Cincinnati, OH