Lawn care and landscaping in Miami, FL made simple

Welcome to your Eden page for Miami, FL. Get a free quote and order from top rated contractors in Miami. Lawn maintenance, snow removal and landscaping companies are available for hire from the ease of your computer and smartphone.

Miami, officially the City of Miami, is the seat of Miami-Dade County, and the cultural, economic and financial center of South Florida in the United States. The city covers an area of about 56 square miles (150 km2) between the Everglades to the west and Biscayne Bay to the east. Miami is the sixth most densely populated major city in the United States with an estimated 2018 population of 470,914. The Miami metropolitan area is home to 6.1 million people, the second-most populous in the southeastern United States and the seventh-largest in the nation. The city has the third tallest skyline in the U.S. with over 300 high-rises, 55 of which exceed 490 ft (149 m).

Miami is a major center and leader in finance, commerce, culture, media, entertainment, the arts, and international trade. The metro area is by far the largest urban economy in Florida and the 12th largest in the United States, with a GDP of $344.9 billion as of 2017. In 2018, Miami was classified as an Alpha level global city by the GaWC. In 2019, Miami ranked seventh in the United States and 31st among global cities in terms of business activity, human capital, information exchange, cultural experience, and political engagement. According to a 2018 UBS study of 77 world cities, the city was ranked as the third-richest in the United States and the eighth-richest in the world in terms of purchasing power. Miami is nicknamed the "Capital of Latin America" and is the largest city with a Cuban-American plurality.

Greater Downtown Miami has one of the largest concentrations of international banks in the United States, and is home to many large national and international companies. The Health District is a major center for hospitals, clinics, and the biotechnology and medical research industries. PortMiami is the busiest cruise port in the world in both passenger traffic and cruise lines, and refers to itself as the "Cruise Capital of the World". Miami is also a major tourism hub for international visitors, ranking second in the country after New York City.

Miami and its suburbs are located on a broad plain between the Everglades to the west and Biscayne Bay to the east, which extends from Lake Okeechobee southward to Florida Bay. The elevation of the area averages at around 6 ft (1.8 m) above sea level in most neighborhoods, especially near the coast. The highest points are found along the Miami Rock Ridge, which lies under most of the eastern Miami metro. The main portion of the city is on the shores of Biscayne Bay, which contains several hundred natural and artificial barrier islands, the largest of which contains Miami Beach and South Beach. The Gulf Stream, a warm ocean current, runs northward just 15 miles (24 km) off the coast, allowing the city's climate to stay warm and mild all year.

Miami has a tropical monsoon climate (Köppen climate classification Am) with a marked drier season in the winter. The city's sea-level elevation, coastal location, position just above the Tropic of Cancer, and proximity to the Gulf Stream shape its climate. Average winter high temperatures, from December to March, range from 76.4–80.3 °F (24.7–26.8 °C). January is the coolest month with an average daily temperature of 68.2 °F (20.1 °C). Low temperatures fall below 50 °F (10 °C) about 10–15 nights during the winter season, after the passage of cold fronts that produce much of the winter rainfall.

The wet season begins sometime in June, ending in mid-October. During this period, temperatures range from the mid 80s to low 90s (29–35 °C) and are accompanied by high humidity, though the heat is often relieved in the afternoon by thunderstorms or a sea breeze that develops off the Atlantic Ocean. Much of the year's 61.9 inches (1,572 mm) of rainfall occurs during this period. Dew points in the warm months range from 71.9 °F (22.2 °C) in June to 73.7 °F (23.2 °C) in August.

Hurricane season officially runs from June 1 through November 30, although hurricanes can develop beyond those dates. The most likely time for Miami to be hit is during the peak of the Cape Verde season, which is mid-August through the end of September. Although tornadoes are uncommon in the area, one struck in 1925 and another in 1997. Around 40% of homes in Miami are built upon floodplains and are considered as flood-risk zones. 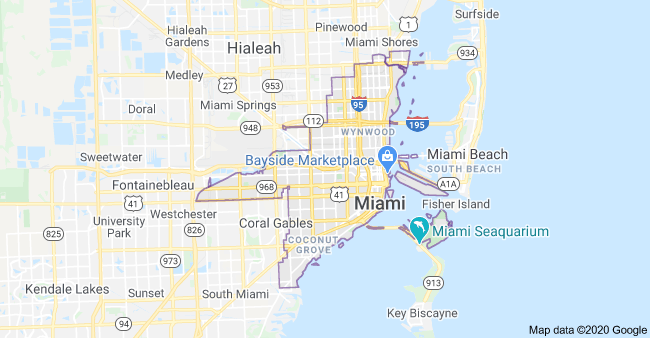 Neighborhoods We Service in Miami, FL